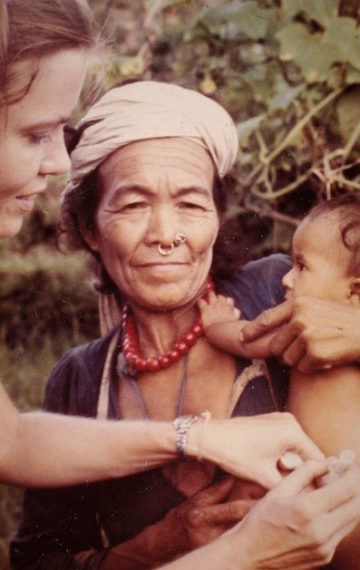 Beyond the Next Village: A Year of Magic and Medicine in Nepal is a memoir of discovery, growth, and adventure in one of the most exotic countries in the world. An American nurse, I left the comforts of life in San Francisco in the late 1970s to spend a year leading a health team trekking throughout the Himalayan foothills of Gorkha District in Nepal. The book describes the challenges and excitement of setting out to live in a mysterious and foreign mountain culture, far from the luxuries of home. Readers travel along as I spend hours on arduous daily treks in the magical terrain of Nepal. They listen in as I learn to communicate in a new language, at the same time serving as the only modern health care provider for many of the village people I encounter. In the process, they get to know my Nepali team, and the fascinating rural Nepali people of picturesque villages who so often shoulder tragic hardships. Entering a world of open gender discrimination provides an eye-opening view of the plight of women worldwide, as well as the complex ways in which socioeconomic and gender inequities underlie most of the disease and early death prevalent in poor countries such as Nepal.